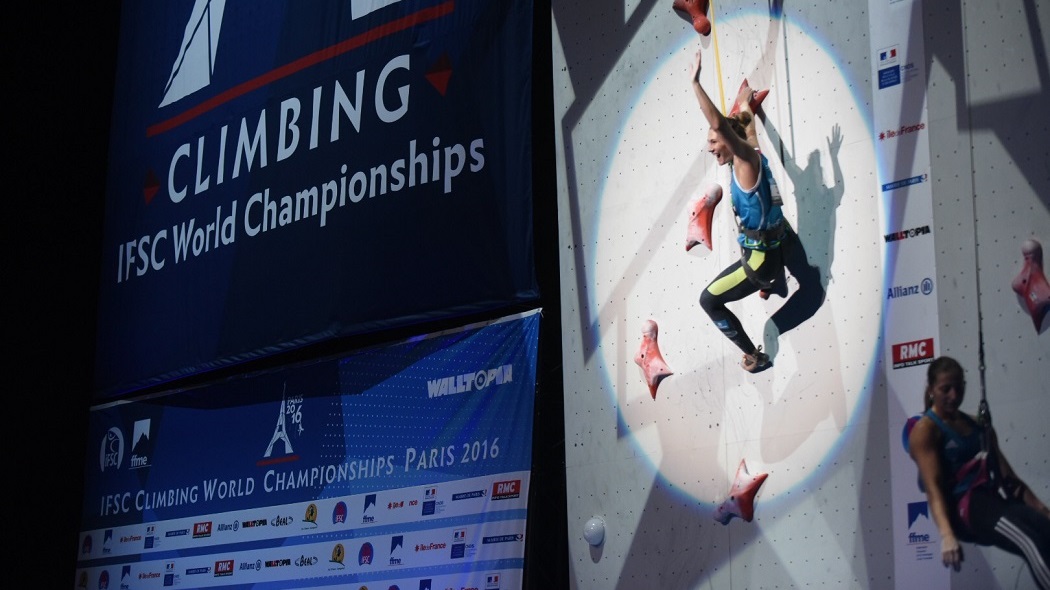 D5: Women world record (or almsot) on the speed wall

Or almost... Because the speed wall didn't get the agreement. Anna Tsyganova becomes world champion and beats the world record for one hundredth of a second, in final against Anouck Jaubert (FRA) : 7'52.

What a last run! The leader of the World Cup Anouck Jaubert in front of her crowd, against one of the most efficient speed climber in the world, the Russian Anna Tsyganova. The starter asks the crowd for a complete silence. But the spectators seem to have some difficulties to stay quiet. The start is given, and it's going fast, really fast. No mistake here. It's going to go straight to the top. Tsyganova seems to be faster. The French woman tries to give more speed, but can't reach the Russian torpedo.

The climbers reach the top : 7'52 for the Russian, one hundredth of a second better than the world record! 7'79 for Anouck Jaubert: the French champion has nothing to be ashamed of.

In the small final, two major climbers of the 2016 season were fighting for bronze: Iuliia Kaplina (RUS) and Aleksandra Rusdzinska (POL). The Russian took the best on the Polish and went for the bronze.

"Of course, Anouck is a bit disappointed. She climbed for gold, it's not a secret. But she has nothing to be ashamed of: the Russian just climbed faster. Considering the complexity of competing at home, and the pressure to be the top athlete at the start, Anouck made an amazing competition in Bercy”, reacted Sylvain Chapelle, the French speed climbing coach.

Also amazing, the performance of the young talent Elma Fleuret. She finishes at the 6th rank of her first World Championships. Victoire Andrier was bitten in 1/8 of final, as Aurélia Sarisson – really disappointed – who made a mistake during a first run of finals (13th and 14th).