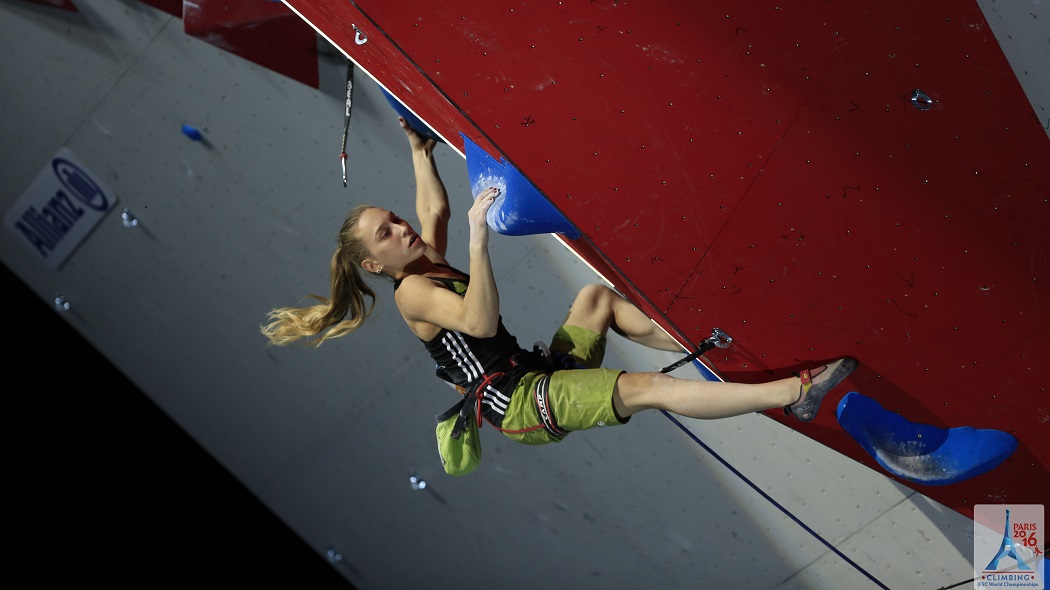 D4: The lead climbing world has a new queen

Janja Garnbret – 17 years old – is the new lead world champion. Here is the story about her epic victory.

First, there was a difficult section. In the first third of the route, things are getting hard for the first climbers. Alina Ring (SUI), Claire Buhrfeind (USA), Magdalena Röck (AUT) and Julia Chanourdie (FRA) fall. A true slaughter.

But then, one climber finally finds the solution. It was almost surprising to see the Austrian Jessica Pilz keep climbing such easily. But she’s holding on, and manages to be the first climber of the evening to reach the last part of the route. Supported by the entire arena, she goes further, and finally fall before the last « volume », on the 44th move.

Calm, meticulous, it’s Anak Verhoeven’s turn to start climbing. The moves are well managed but with many stops. The Belgium climber seems to struggle. It’s not a good sign. At the end of the pull-up section, she seems tired. She shakes her arms. But don’t trust her rictus. On each difficult move, she surprises us, relentless. Every hand and foot moves are well negotiated. And step by step, she climbs towards the top. Anak Verhoeven topped the 2016 World Championships’ final route. Unfortunately for her, she is not be the only one.

Then Kim hesitated. Honestly, we thought she would make it. The way she climbs seems so effortless. But even for Kim Jain, the final route of the Climbing World Championships is very difficult. After Pilz, the Korean falls on the 44th move.

Mina Markovic struggles in the overhang. She hesitates a lot at some point when clipping. Some shaky moves. But Mina Markovic is a fighter. She passes the overhang after superhuman efforts. She tries to go through the slab upper section but like Jessica Pilz and Kim Jain, she falls on the 44th move.

Julia Chanourdie was the only French woman competing in the final. After her great performance in semi-final, « the run of her life », she is in her very first world championships final. But the first difficult section will make an end to her championships: she doesn’t manage properly a clipping before the overhang, struggles a few more quickdraws and finally falls in the middle of the route, reaching the 6th rank. A promising bright future for her.