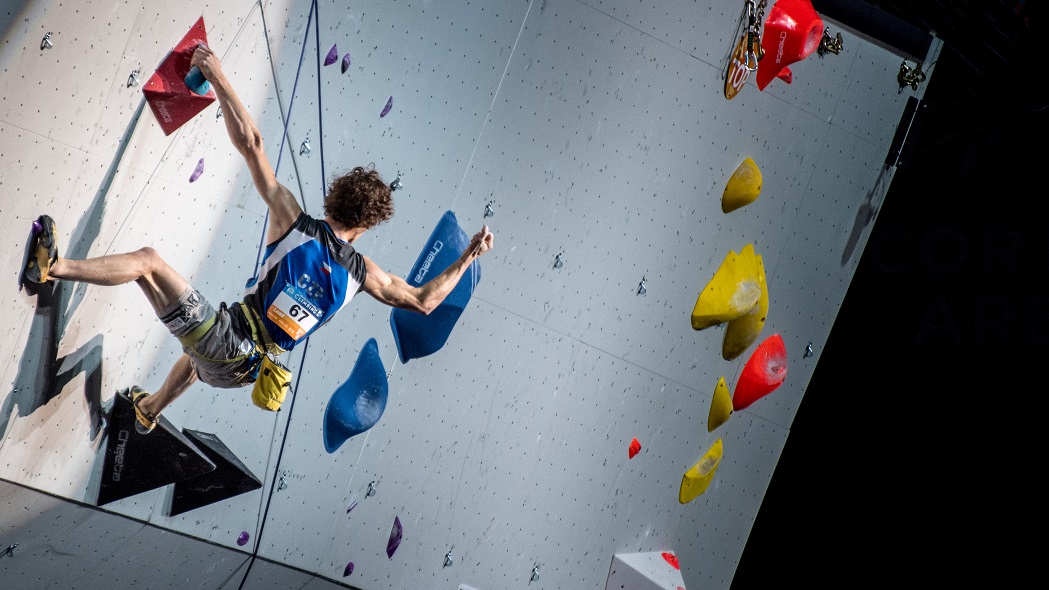 In a spectacular final, Adam Ondra was – without a doubt – the best and made the crowd stand when he took the throne for the second time in a row. Well done Ondra!

On this 8c+ graded route created by Jan Zbranek’s route setters team, there was a succession of moves, each one different from the other. From accuracy during the first tricky part – which Ramon Julian Puigblanque (ESP) fails to pass – to big moves in the overhang that made the climbers’ head spin – the Japanese Keiichiro Korenaga will stop there – but which helped the crowd realize the good shape the climbers were in. To the pull-up section to handle when feeling tired, which was where the athletes were fighting for the world title.

Up there, the scenario was close to perfection. Stefano Ghisolfi (ITA) was the first one to go near the blue volumes and the tiny purple holds of the upper section (7th). Sean McColl (CAN) will manage to get there as well and confirms this #37 hold when the Italian did not (6th). Romain Desgranges (5th) – climbing at home – will do one more move, but fails to grab the 2nd blue volume on the slab. Same for Domen Skofic (SLO) who stops on the same hold 38+ (4th).

This is what we needed to have a perfect finish. The medals were not decided in the pull-up section, but two moves further, the slab. The first one to reach this area is Gautier Supper. The French climber, pushed by a standing crowd, tries to grab the two tiny holds but cannot stand anymore and falls. At this point, he doesn’t know it yet but he just secured the bronze medal of these Climbing World Championships! Jakob Schubert reaches the same spot and goes one move further. He gets the silver medal.

The King is the last one to climb. The arena stopped breathing. On the other hand, Adam Ondra looks quite relax. He has a good rhythm and passes the #42 hold. He grabs the two tiny holds like his life was depending on it. He is still holding on the wall. But the next bucket seems far, so far. Adam goes for it…and gets it! The King is World Champion for the 2nd time in a row.

And what makes it a perfect story is that Adam Ondra knows he just won the title. And he is not going to let this bucket go. Adam Ondra allows himself a break, to enjoy this new victory with the French crowd. He is on the moon. The crowd is going wild.

But the route is not toped yet. Nor the story. “Adam, Adam, Adam”. The crowd wants its champion to go to the top. Adam Ondra follows the Arena rhythm for his happy end. The Czech topes the route. He shouts his joy. Adam is the King again. Long live the King.